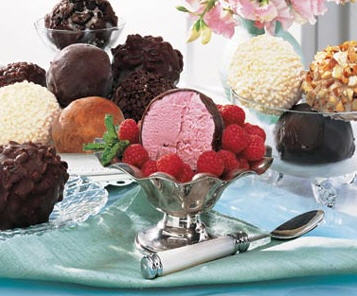 Ice cream is a frozen, pasteurized mixture of milk, cream, nonfat milk solids, sugars, and stabilizers. Its contents and manufacture are regulated by the government and must meet Standards of Identity. To be called ice cream, a product must contain a minimum of 10 percent butterfat, which is dispersed throughout the mix to impart smooth texture. Fresh sweet cream is the best source of butterfat; unsalted butter, which is about 83 percent fat, can replace 50 to 75 percent of sweet cream fat. Other fat sources that can be used include anhydrous butter oil, concentrated sweet cream, and dried cream. French ice cream, or frozen custard, also contains more than 1.4 percent of egg yolk solid. Consumer concerns about the negative health effects of fat in the diet, however, led to the popularity of lower-fat products such as ice milk, which contained between 2 percent and 7 percent butterfat.