Unlike all other light fixtures, exit signs are highly regulated. Most all other fixtures are a matter of user preference, with a few exceptions such as breakage protection and use in explosive atmospheres. Exit signs are regulated by the National Fire Protection Association (NFPA), the National Electric Code (NEC), Building Codes and a few others such as OSHA, UL, and local code agencies. Codes include requirements for locations, brightness, letter style, size, back-up systems, and emergency lighting requirements. Fortunately for the end-user, most manufacturers only market products that meet the most stringent codes.

The most common exit sign is the 2 lamp, 25 – 50 watt, incandescent fixture. While not many new incandescent fixtures are sold today, they still have a firm hold on the existing market. The exit sign is an easy target for the Lighting Energy Audit as there have been many replacement and retro-fit options available since the early 1980s. Paybacks are less than 2 years in almost all areas of US and Canada.

Although small, there are a lot of them and they are on 24/7. Someone has estimated that if all existing incandescent exit signs were replaced with LED signs, the savings would exceed 25 billion kWH and eliminate 10,000 Megawatts of electrical demand in the US alone.

Radio-luminescent – 0 watts; Beta-ray emissions from a mildly radioactive isotope striking phosphors on the inside of a sealed glass tube causing them to glow.

Light Emitting Diodes  LED – 2 – 14 watts. Solid-state semi-conductors that cause a glow when a very small electric current is passed between two different layers. 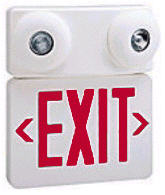 As stated in the Overview above, exit signs are heavily regulated. The primary regulation comes from the NFPA, with enforcement by OSHA and local building codes officials.

If the facility is required to have emergency lighting systems, the EXIT Signs must also have some sort of back-up system. They can either be wired to a dedicated electric circuit that is serviced by a standby genset or UPS system, or they must have their own self-contained battery back-up system.

When the Compact Fluorescent Lamp was first introduced, a common application was the EXIT Sign. Hundreds of thousands of EXIT Signs have been retrofitted with CFLs since the early 1980s. With the advent of improved and greatly reduced costs of LEDs, CFLs are now considered the ‘to be replaced’ technology.

LED exit signs have been on the market since 1985. First-generation LED exit signs used the LEDs to spell EXIT in direct view. These exit signs were very expensive, over $200 each, which kept market penetration extremely low.

Significant technology developments have brought down the cost and improved the LED exit signs. Second-generation LEDs have been developed that are up to 30 times as bright as the first generation. Instead of using the LEDs in direct view to spell “EXIT”, the higher light output allows the LEDs to be used as an illumination source in exit sign boxes, like with incandescent and fluorescent exit signs. The use of strips of LEDs as the illumination source also makes them feasible for retrofit applications. LED strips typically use less than 2 watts per fixture, and leave lots of room for a self-contained back-up battery.

Any web search will return virtually hundreds of lighting products. It is important to be VERY specific if looking for a specific product. The following web site is especially helpful because it show cases many different types of exit signs and emergency lighting systems, and also has information about code requirements.

Go to their web site at www.chloridesys.com