Flue gas has a substantial amount of energy remaining in it after it has heated the process, but it can be difficult to recover for useful purposes. As a general rule of thumb, up to 20% of the input energy is lost in the flue gas, higher with process temperatures above 1,000F. If there is an application that could benefit from the use of hot water below 212F, then a condensing flue gas recovery system could be used. If the process is high temperature and there is a use for steam, then a Heat Recovery Steam Generator (HRSG – commonly pronounced ‘HeRSiG’) could be used.

Units that spray water in direct contact with the flue gases are also able to be used as an emissions control technology. This is the same principal as a ‘Wet Electro-Static Precipitator’ (Wet ESP or Wet Scrubbers) commonly used for particulate emissions control. However, Wet ESPs typically don’t put the heated water to any other use. 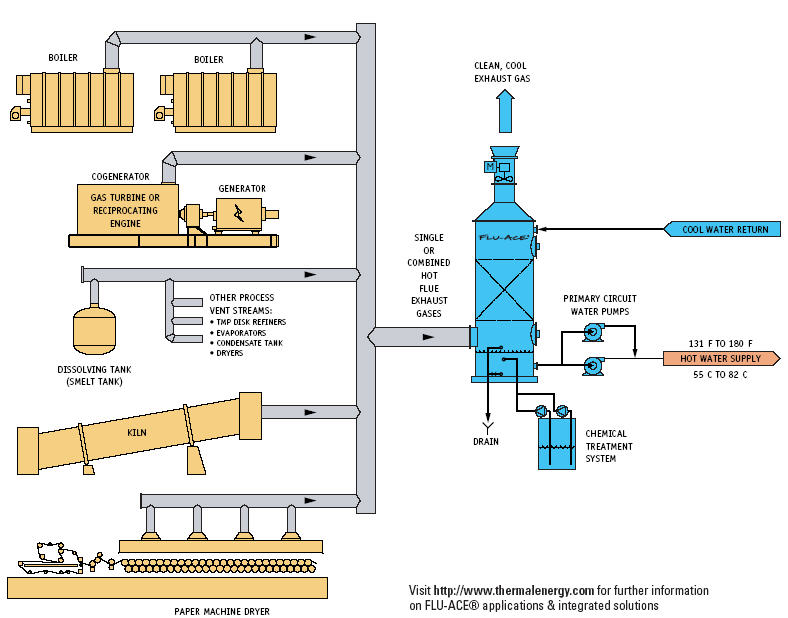 The Specific Heat of Air is about 0.017 BTUs per Cubic Foot. Therefore, if cold water is to be heated by flue gas at 500F, then there is a potential to recover 459 BTUs per Hour from every cfm of flue exhaust air. The formula is:

Flue gas also contains a large amount of water vapor. For every 1 pound of water condensed, 970 BTUs is given up. There is about 10 lbs of water vapor for every 1 Million BTUs combusted, or about 9,700 BTUs that could be recovered in condensate.

Because flue gas is often hotter than 500F and cfm is generally measured in thousands of cfm, then the potential for energy recovery is huge. The heat recovery system may not recover 100% of the energy, but it is off-setting the energy that would have been provided by another system – such as a water heater or boiler, that is not 100% efficient either.

When estimating the savings potential of a heat recovery system, be sure to consider the efficiency of the equipment that is/would be providing the heat if the recovery system were not in place. For example, 1 Million BTUs of recovered energy is actually worth 1.2 Million BTUs of purchase energy if the heating process is 80% efficient. 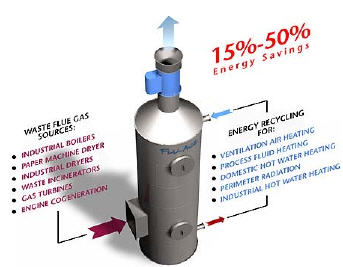 Go to their web site at www.thermalenergy.com

Latent heat recovery involves the heat recovered through condensation of water vapor. Nearly all exhaust gases contain some moisture in the vapor form. As the exhaust stream cools, it eventually reaches its “dew point” and from then on water vapor begins to condense. In doing so, large amount of recoverable heat is released.

In a typical natural gas fired boiler, the flue gas contains roughly 12% of water vapor and at that concentration, the “dew point” is around 135°F. The FLU-ACE® tower cools the exhaust gases below the dew point temperature, forcing water vapor to condense and hence, recovers nearly all of the heat content.

Conventional economizers can cool exhaust gases to about 275°F and recover only a small fraction of the total waste heat. In most cases the FLU-ACE® can recover five to six times more heat than typical indirect contact economizer.

The ability to recover latent waste heat is one of the FLU-ACE®’s great strengths and advantages. With the high efficiency condensing heat recovery tower, the hot and humid exhaust gases cool well below their dew point temperatures, releasing not only the majority of the available heat, but also yielding significant amounts of reusable hot water.