Space Cooling has been dominated by electric technology for the past 50 years, when the CFC vapor compression cycle became effective in large tonnage applications.  Prior to this, large tonnage cooling was either absorption chillers or ammonia compression.

Single effect absorption units are large, inefficient, and have some operational problems.  Ammonia units suffer from a bad image, due to the noxious fumes in the event of an ammonia leak.  Ammonia is still widely used today for refrigeration and low temperature applications, but it is not very commonly used for space cooling.  Therefore, when new electric equipment became available that eliminated most of the problems with the gas equipment, gas lost most of its market share.

In an effort to regain its market, manufacturers of gas equipment developed the Double-Effect absorption chillers and made many other operational improvements with computerized controls.  They also developed the direct fired absorption chiller, which replaced the steam chamber with a fire chamber.  Most of this work was done in Japan.

Engine driven equipment was developed with the support of the gas industry.  Engine driven equipment uses the same CFC compressors, but replaces the electric motor drive with a natural gas engine.  The cooling cycle is exactly the same, only the drive is different.  Engine systems also offer heat recovery from the engine as an option, further increasing system efficiency.

A third approach was to split the Latent Cooling Load (humidity control) from the Sensible Cooling Load (Temperature) and handle it separately.  Desiccant dehumidification removes moisture from the air, but does not reduce its temperature; actually, the air temperature goes up a little.  The moisture goes into the desiccant and is then removed from the desiccant by a heat source (natural gas burner).  Desiccant systems can reduce humidity substantially lower than conventional condensation moisture removal systems can.

Gas cooling technologies have a higher first cost than electric systems.  It requires a careful analysis of fuel costs and operating conditions to determine if there is an economic incentive to install gas over electric.  Other reasons to use gas may be environmental issues, available heat source, or a need to reduce humidity lower than what can be done with normal condensation of water vapor.

Gas Equipment is rated in COP (Coefficient Of Performance)

COPs vary from 0.5 for single-effect absorption to near 2 for engine drive units. 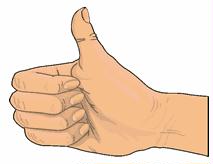 Space Cooling loads are about 2/3rd Sensible and 1/3 Latent over the average season; during times of high humidity, it can switch around.

The highest efficiency electric equipment is large tonnage water cooled with EERs of 24; however, large units are NOT rated in EERs but watts/ton.  Therefore, 0.5/kW per Ton.  (or 500 watts per ton)

Air cooled units are the lowest cost, lowest efficiency, as compared to water cooled units with cooling towers.  Small units, under about 50 tons, are called “DX” for Direct Expansion. 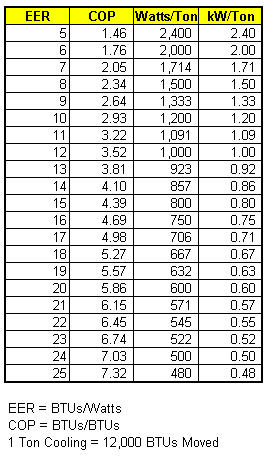 Absorption Chillers are defined by their Input Energy Source and as either Single or Double Effect.  The oldest units were steam ‘fired’ (driven) with the newest units being direct fired (natural gas and fuel oil).  Efficiency gains have allowed some units to be fired by hot water.

The old Single-Effect units have COP of about 0.5; the newest Double-Effect have COPs near 1.0.  Single-Effect units are still available as they are the lowest cost units and can make economic sense if there is a cheap steam source, such as with cogen or waste energy plants.

Engine driven chillers are the same as electric chillers on the chiller end, but use engines instead of motors to drive the chiller.

TECOCHILL has done more work than any other manufacturer to create a full line of engine-driven chillers.  They have sizes available from air cooled 50 tons to water cooled 400 tons in a single unit.  Engine driven chillers are the most efficient natural gas cooling technology. York and Caterpillar teamed up to create some very large tonnage units for large applications that would be impractical with multiple smaller systems.

Desiccant systems are not really chillers, but they do part of the work of a chiller by removing humidity from the conditioned space.  Desiccant systems are usually used in humid climates or special applications that need dryer air than conventional systems can produce.  They may be used in combination with chiller systems to both dehumidify and reduce the temperature of the same air stream.

For more information on Desiccant Dehumidification