Lighting is everywhere and used for so many purposes we may think that we know about all there is to know about it. Even though there are estimated to be over 10,000 different lighting products, a new product is introduced almost daily. Driven by various needs from function to energy conservation, new products offer more light for less energy engineered to provide an ever-narrowing specific function. If you still think that a ‘light bulb is just a light bulb’ then there’s a LOT you don’t know about lighting!

On the other hand, even though there are thousands of different products available in the market today, there are really only two kinds of light bulbs (lamps): 1) those that have filaments, and 2) those that don’t. Filaments are wires (some sort of titanium) that glows white-hot when electricity passes through them. Non-filament lamps, such as fluorescent tubes, contain only gases between two electrodes. The gas reacts with other components of the lamp to produce visible light.

The light bulb is called the ‘lamp’ and what holds the bulb and makes it work, is called the ‘fixture’.  Some fixtures are designed for only one kind of lamp, where others are designed for or may be readily adapted for many different lamps. Some fixtures hold only one lamp, others will hold multiple lamps. A lens is what covers the fixture and the light passes through. A fixture may have a lens or be an ‘open fixture’ with no lens. A lamp, fixture and lens together are sometimes called the ‘luminaire’.

Lamp Life is rated in hours of operation, with an assumed number of on-off switches. It is a specific hour that is actually an average number of hours to failure. Half of the lamps are expected to have failed and the other half still in operation when the ‘lamp life’ hour/point is reached. It should also be noted that lamp life is given at time of failure. Many lamps do not have catastrophic failure (burn-out) before they suffer substantial drops in light output. Fluorescent and Mercury Vapor lamps lose much of their light output over their lamp life. It is generally recommended that they be replaced before they actually burn-out.

Lumens is a measure of the gross light output from the lamp. A higher lumen is a brighter lamp.

Lamp Color or CRI (Color Rendering Index) is the rating given to a lamp as to how well it represents the true colors of the objects it illuminates. A higher CRI (80 – 90) means the light source is very true to color. A low CRI (under 50) means the light does not correctly indicate most colors.

Efficacy is similar to efficiency, but since the units are different, they had to come up with a different name. Efficacy is Lumens Output / Watts Input, or Lumens per Watt. Efficacy is way to compare different kinds of lamps to a common measurement. A higher Efficacy means a more efficient light, as it relates to energy usage, but not necessarily a better light for a given task.

Foot Candle Standard is the measure of light required for adequately lighting a space. Most codes and standards will specify a given ‘Foot Candle’ for a particular space or task. Foot Candles are the same as Lumens per square foot. Lux is a metric measurement of light on a surface; 1 Lux = 1 Lumen per square Meter. Since there are about 10 square feet in a square meter, 1 Lux is about equal to 10 Lumens.

CU is Coefficient of Utilization, which is a ratio of lumens from a fixture received on the workplane compared to the lumens emitted by the lamps. A high CU means a quality fixture correctly installed such that most of the available light from the lamp reaches the places it needs to be. 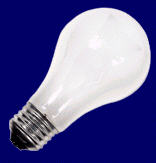 Incandescent is the original light bulb. It has a filament and operates in a near vacuum or space filled with inert gas. Incandescent is the basis for most comparisons related to the light output and energy usage of all other lighting types. It is the oldest and least energy efficient of all lighting systems. Standard lamps are available in watts ranging from about 5 watts up to about 300 watts.

Quartz and Halogen lamps are in the incandescent family. They are only slightly more efficient than standard lamps as they are gas filled to allow the filament to burn brighter (hotter) and last longer. Quartz and Halogen bulbs require special fixtures because of their high operating temperature. They are commonly available from about 250 watts to 750 watts.

Conventional incandescent lamps do not require ballasts to operate. However, new, very small, very bright lamps that resemble old-style slide projector lamps, used in track and spot lighting, do require ballasts and special fixtures. They tend to be rated for under 50 watts, but have lumen outputs several times their conventional counterparts. 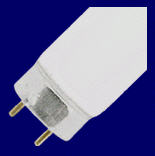 Fluorescent lamps have no filament. They are filled with gas that is excited by an electric arc produced by a ballast that is passed through the tube. The gas does not glow, but it reacts with the white phosphor coating on the inside of the glass tube, and the coating glows to produce the light. Fluorescent lamps used about 1/3 the electricity and produce about twice as much light as incandescent lamps.

Standard lamps are called ‘T12’ for ‘Tube’ and 12 watts per lineal foot of lamp. A standard 4′ florescent tube is rated for 40 watts and the ballast uses the other 8 watts. A standard florescent fixture has 2 or 4 lamps and rated for 100 or 200 watts per fixture. (Approximately) 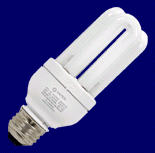 Newer higher efficiency lamps are called T8, or 8 watts per lineal foot of lamp. Some T12 fixtures can be retrofitted with T8 lamps, but most have to be replaced, fixture and lamp, during a retro-fit.

Many screw-in retro-fit lamps have been developed within the last 15 years, primarily for the energy conservation market. These lamps, called Compact Fluorescent Lamps or CFL, last longer so also have a maintenance cost advantage in commercial use. They have a self-contained electronic ballast in their base. 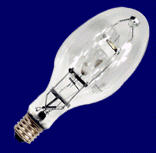 HID is the ‘newest’ and includes the most energy efficient lighting systems in common use today. HID lamps are filament lamps with various gases that contribute to their names. All HID lamps require a ballast, and most ballasts are designed for only one kind of lamp.  The first to be developed was the Mercury Vapor lamp in the 1930’s. Mercury Vapor produces a very bright, high color quality light, relatively efficiently. The Mercury Vapor lamp is inexpensive compared to other HID lamps, but its environmental issues will likely be its eventual demise. Although fluorescent and other HID lamps also use mercury, their name does not call attention to it! Improvements are continuously being made to lamps to reduce the amount of mercury needed to make them work, but creative naming is also helping. (The sodium lamps actually contain more mercury than sodium.)

Lamps that contain mercury and lead, fluorescent, mercury vapor, metal halide and high pressure sodium, have been classified by the EPA as ‘universal wastes’. This is waste that is considered hazardous, but is in common use. EPA regulations dictate certain aspects of handling, transporting and disposing of ‘universal wastes’. In response, lighting manufacturers have also developed new lamps that are made with less mercury and others with additives that make the mercury less reactive when released to the environment.

The EPA regulations have no impact on small waste producers, but large facilities or others with substantial volumes of lamp wastes must comply with proper handling and disposal requirements.

The common denominator of all lamps is wattage. Wattage is additive, so no matter what the lamp and fixture combination is, if you know (or can estimate) the total wattage, you can determine the operating cost. The basic formula is:

For information about energy/cost savings and retrofits see  Lighting Retrofits

Go to the GE web site at www.gelighting.com

Go to the Lithonia web site at www.lithonia.com

Philips is number one in the global lighting market, a position supported by leadership in innovation combined with a systematic approach to seeking out new market opportunities. Its strategic ambition is to set the pace in the lighting industry as the first-choice innovative partner for the supply of creative and cost-effective lighting solutions.

Go to the Philips web site at www.lighting.philips.com

Welcome to OSRAM SYLVANIA, the North American division of OSRAM GmbH – the world’s second largest lamp and materials manufacturer – and part of the Siemens family of companies. OSRAM SYLVANIA manufactures and markets a wide range of lighting products and other products for consumers, and for corporate customers in the automotive, computer, and aerospace markets, as well as many other major worldwide industries. Our headquarters are located in Danvers, Massachusetts, just north of Boston.

Go to the Sylvania web site at www.osramsylvania.com

The IESNA is the recognized technical authority on illumination. For over ninety years its objective has been to communicate information on all aspects of good lighting practice to its members, to the lighting community, and to consumers through a variety of programs, publications, and services. The strength of the IESNA is its diversified membership: engineers, architects, designers, educators, students, contractors, distributors, utility personnel, manufacturers, and scientists, all contributing to the mission of the Society: to advance knowledge and disseminate information for the improvement of the lighted environment to the benefit of society.

The IESNA web site includes a comprehensive manufacturer’s listing and links to may other organization web sites within the lighting industry. It also contains a link to their LPD (Lighting Power Density) Committee that includes information and models about how to calculate/estimate LPD.

Go to the IESNA web site at www.iesna.org