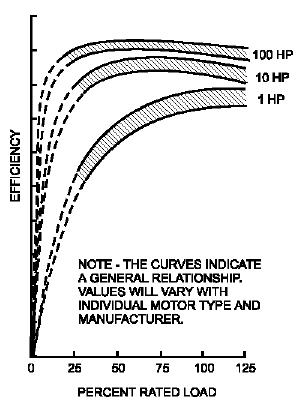 Standard induction motors are considered 90 to 95% efficient, if they have been correctly sized and applied to the application. Depending on what the motor is driving, the delivered efficiency can be substantially less than 95% of the input electricity – caused by losses in pulleys, belts, gear boxes, etc.

In 1992 the Energy Policy Act dictated the minimum efficiency for electric motors. Competition among the motor manufacturers have now produced motors that exceed the Act’s requirements. Therefore, the National Electrical Manufacturers Association, NEMA, has created their own standards called the NEMA Premium. These standards not only affect the motor itself, but consider how the motor is connected and used to drive loads.

When it comes to electric motor efficiency, gone are the days of sizing a motor based on how well it fits into the mounting space. It’s not ‘rocket science’ but if you’ve never selected a new motor for a new application, you would be amazed at how many options there are and how your results will be affected by the many choices you must make.

Just a few ideas about motor efficiency are covered here.

In 1992 the Energy Policy Act mandated the minimum efficiency for most classes of electric motors that would be manufactured after October 1997. Intense competition among manufacturers (and a fair amount of dispute over how to actually measure and prove the various efficiency gains) results in NEMA producing the NEMA PremiumTM   efficiency standard in 2001.

According to the Standard, “An electric motor is an energy converter, converting electrical energy to mechanical energy. For this reason, an electric motor should be considered as always being connected to a driven machine or apparatus, with specific operating characteristics, which dictate the starting and running load characteristics of the motor. Consequently, the selection of the motor most suitable for a particular application is based on many factors, including the requirements of the driven equipment (e.g., starting and acceleration, speed, load, duty cycle), service conditions, motor efficiency, motor power factor, and initial motor cost. These factors often conflict with one another. The driven system efficiency is the combination of the efficiencies of all of the components in the system.”

Therefore, “Good energy management is the successful application of the motor controller, motor, and the driven components that results in the least consumption of energy.”

Select the RIGHT Motor for the Application 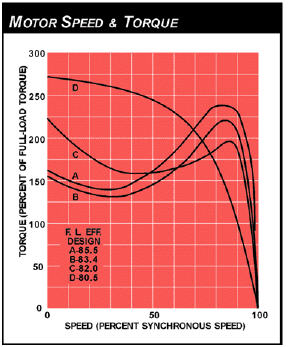 Motor selection is a complicated process containing numerous tradeoffs. Efficiency is only one of several important considerations. The objective of informed motor selection is to arrive at the best possible installation consistent with minimum cost, horsepower and frame size for the specified life expectancy, load torque, load inertia and duty cycle of the specified application.

To satisfy the torque, horsepower, and speed requirements of a large variety of motor applications, polyphase AC motors are designed and manufactured in four groups classified Design A, B, C, and D by NEMA. Each classification of motors has its own distinctive speed–torque relationship and inherent expectations regarding motor efficiency.

Motors intended for loads that are relatively constant and run for long periods of time are of low slip design (less than 5%) and are inherently more efficient than Design D motors which are used in applications where heavy loads are suddenly applied such as hoists, cranes and heavy metal presses. Design D motors deliver high starting torque and are designed with high slip (more than 5%) so that motor speed can drop when fluctuating loads are encountered. Although Design D motor efficiency can be less than other NEMA designs it is not possible to replace a Design D motor with a more efficient Design B motor because it would not meet the performance demands of the load.

The motor with the highest operating efficiency does not always provide the lowest energy choice.

Following these tips are the basis for good motor selection and efficiency:

To estimate energy savings from motor efficiency improvements, use the following equation:

S = Savings in Dollars per Year

C = Cost per kWh (including average demand rate if applicable)

The difference in the efficiency rating of ‘high’ efficiency motors over ‘standard’ efficiency motors appears to be  a small number. However, when the number of run hours and the cost of electricity is considered, a small efficiency gain can result in a significant dollar savings. The economics will probably NOT justify replacing working motors, but can easily justify the purchase of higher cost, higher efficiency motors in high load factor applications.

Gains in motor efficiency are The following Table is based on $0.08/kWh electricity and 7,200 run hours. It compares Reliant higher efficiency motors (XE Line) with ‘Industry Average’ efficient motors. 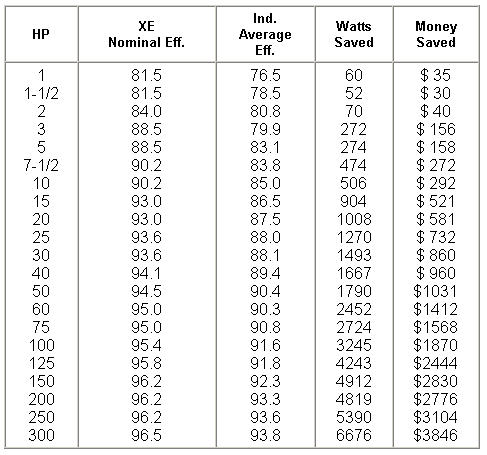 Use the formula above to estimate energy savings from each specific application. Software programs available from vendors and Motor Master+ can be used to make calculations easier.

For more information about electric motor efficiency, go to the www.nema.org web site and look up Publication MG 1-1998 and MG 10-2001.

The DOE Motor web site is located at www.eere.energy.gov/EE/industry.html