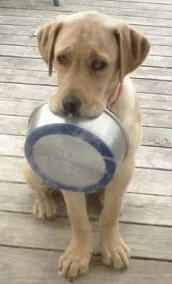 Pet food is a specialty food for domesticated animals that is formulated according to their nutritional needs. Pet food generally consists of meat, meat byproducts, cereals, grain, vitamins, and minerals. In the U.S. about 300 manufacturers produce more than 7 million tons of pet food each year, one of the largest categories of any packaged food. Pet owners can choose from more than 3,000 different pet food products, including the dry, canned, and semi-moist types, as well as snacks such as biscuits, kibbles, and treats. In the 1990s, this $8-billion industry feeds America’s 52 million dogs and 63 million cats.

Commercially produced pet food has its origins in a dry, biscuit-style dog food developed in England in 1860. Shortly afterwards, manufacturers produced more sophisticated formulas, which included nutrients considered essential for dogs at the time. At the beginning of the 20th century, pre-packaged pet foods were also available in the U.S. Initially they consisted primarily of dry cereals, but after World War I, dog food made of canned horse meat was available. The 1930s ushered in canned cat food and a dry, meat meal type of dog food. Some innovations by the 1960s were dry cat food, dry expanded type dog food, and semi-moist pet food.

Beginning in the 1980s, trends in the pet food market included greater demand for dry foods and less for canned foods. Research suggested that a soft diet of canned dog food led to gum disease more quickly than did dry food. In general, the growing health-consciousness of the public led to an increased interest in more nutritious and scientific formulas for pet foods, such as life-cycle products for younger and aging pets, and therapeutic foods for special health conditions of the pet, such as weight loss and urinary problems. Pet food producers were also more inclined to use less fatty tissue and tallow and more protein-rich tissue. Finally, the pet snack category grew in popularity with products like jerky snacks, sausage-shaped pieces, biscuits, and biscuit pieces called kibbles.

The primary ingredients in pet food are byproducts of meat, poultry, and seafood, feed grains, and soybean meal. The animal parts used for pet food may include damaged carcass parts, bones, and cheek meat, and organs such as intestines, kidneys, liver, lungs, udders, spleen, and stomach tissue. Cereal grains, such as soybean meal, corn meal, cracked wheat, and barley, are often used to improve the consistency of the product as well as to reduce the cost of raw materials. Liquid ingredients may include water, meat broth, or blood. Salt, preservatives, stabilizers, and gelling agents are often necessary. Gelling agents allow greater homogeneity during processing and also control the moisture.

Except for the ingredients, the general manufacturing process for pet food is similar to that for processed food. The flesh products used in pet foods must first be rendered, or processed, to separate the water, fat, and protein components, including soft offals (viscera) and hard offals (e.g. bones and hoofs). Generally, meat is rendered by out-side companies and shipped to pet food manufacturers. The meat products intended for canned food must be delivered fresh and used within three days. Frozen meat products may be used for dry foods.

The manufacturing process entails grinding and cooking the flesh and flesh byproducts. Next, the meat is mixed with the other ingredients, and if the recipe requires, the mixture is shaped into the appropriate forms. The finished product is filled into containers and shipped to distributors.

Innovations in pet food processing and packaging have led to better quality products with longer shelf life. Canned dog foods that are vacuum packed have a shelf life of three to five years and are very stable with little or no loss in nutritional value. Dry dog food, on the other hand, has a shelf life of only 10 to 12 months and requires the addition of preservatives, though some manufacturers are using natural preservatives such as vitamins E and C.