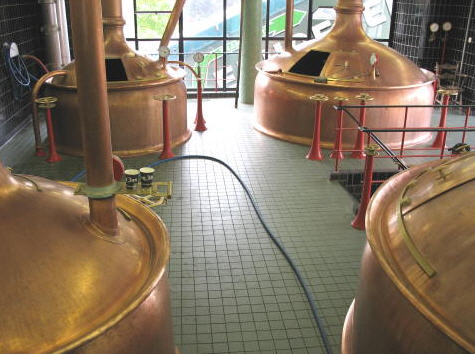 Breweries typically purchase malted grain (malt) from malting operations. In the malting process, grain is first soaked in water-filled steeping tanks for softening. After softening, the grain is transferred to germination tanks, in which the grain germinates, typically over a 1-week period. From the germination tanks, the grain enters a kiln, which halts germination by drying the grain. To begin the brewing process, malt (usually barley malt) is transported by truck or rail to a brewery and is conveyed to storage silos. The malt is then ground into malt flour by malt mills and transferred to milled malt hoppers. Many small breweries purchase malt flour (malted and milled grain) from facilities with malt mills. Malt provides the starch-splitting and protein-splitting enzymes that are necessary to convert grain starches into fermentable sugars.

From the milled malt hoppers, the malt, along with hot water, is fed to the mash tun and heated to convert grain starches to fermentable sugars. Some large facilities use high-temperature mashing, which reduces the time required to convert the starches to sugars, but lowers the quantity of fermentable sugars produced. Most breweries use one of the three principal mashing processes; these are: double mashing, decoction, and infusion. Double mashing uses grains other than barley

(typically corn and rice) as starch adjuncts. Before being added to the mash tun, the adjunct grains are broken down through cooking in a cereal cooker for about 1 hour at temperatures ranging from 40° to 100°C (104° to 212°F). Some plants do not use cereal cookers, but use additives such as corn syrup that function as adjunct grains. The malt and adjuncts are then mixed and heated in the mash tun.

Decoction is a method of boiling portions of the mixture (mash) and adding the boiling portions to the mash tun to raise the overall temperature to about 75°C (167°F). The infusion process mixes the malt with hot water to maintain a uniform temperature (65° to 75°C [149° to 167°F]) until starch conversion is complete. Mixing, heating times, and temperatures vary among breweries. The finished product of mashing is a grain slurry, called mash.

From the mash tun, the mash is pumped to a straining tank called a lauter tun, which separates insoluble grain residues from the mash. The mash enters the lauter tun through a false bottom where the insoluble grain residues are allowed to settle. The grain sediment acts as a filter for the mash as it enters the tank. Various other filter agents, such as polypropylene fibers, are also used. Some large breweries use strainmasters, which are a variation of lauter tuns. The spent grain (brewers grain) from

the lauter tun or strainmaster is conveyed to holding tanks, dried (by some breweries), and sold as animal feed. Brewers grain dryers are typically fired with natural gas or fuel oil. The product of the lauter tun is called wort.

The strained wort from the lauter tun is transferred to the brew kettle and is boiled, typically for about 90 to 120 minutes. Boiling stops the starch-to-sugar conversion, sterilizes the wort, precipitates hydrolyzed proteins, concentrates the wort by evaporating excess water, and facilitates chemical changes that affect beer flavor. Hops are added to the wort during the boiling process. Hops are high in iso-a acids, which impart the characteristic bitter flavor to beer. Some breweries add only

hop extracts (that contain the desired iso-a acids), and some breweries add hop extracts during or after the fermentation process. After brewing, the hops are strained from the hot wort, and the hot wort is pumped to a large settling tank, where it is held to allow the remaining insoluble material (trub) to settle. The trub is transferred to the spent grain holding tanks. After settling, the hot wort is pumped to a cooling system (typically a closed system), which cools the liquid to temperatures ranging from about 7° to 12°C (44° to 54°F). Following cooling, yeast is added to the cooled wort as it is pumped to the fermenters.

Fermentation takes place in large tanks (fermenters–typically with capacities >1,000 barrels for medium to large breweries) that can be either open or closed to the atmosphere. Most closed-tank fermenters include CO2 collection systems, which recover CO2 for internal use and remove organic impurities from the CO2; water scrubbers and activated carbon adsorption systems are used to recover impurities. These closed tank fermenters typically vent emissions to the atmosphere (for a specified period of time) until the CO2 is pure enough to collect. The scrubber water is commonly discharged as process wastewater, and the activated carbon is typically recharged (regenerated) on-site (the impurities are typically vented to the atmosphere).

After primary fermentation, waste yeast is typically removed from the liquid (by centrifuges or other means), and the liquid proceeds to a secondary fermentation or aging process. The liquid is pumped to aging tanks, a small quantity of freshly fermenting wort is added (at some breweries), and the mixture is stored at low temperatures (below about 5°C [41°F]). Several methods are used for the disposal of yeast, including: recovery of viable yeast for reuse in the fermentation process, sale to animal feed processors, distillation to recover residual ethanol, and disposal as process wastewater.

Microbreweries typically produce beer for on-site consumption, although some have limited local keg distribution. The beer production process is similar to that of large breweries, although several processes may be excluded or combined. Most microbreweries purchase bags of either malted barley or malt flour for use in beer making. Malt flour requires no processing and is added directly to the mash tun. The facilities that use malted barley typically have a small “cracker” that cracks the grain prior to mashing. Brewhouse operations (mashing, brewers grain settling, brewing, and trub settling) may be combined to decrease the number of tanks required. Fermentation tanks and storage tanks are much smaller than large brewery tanks, with capacities as small as a few barrels. Many microbrews are held in fermentation tanks for three to four weeks (far longer than most mass-produced beers). Canning and bottling operations typically are not found in microbreweries. 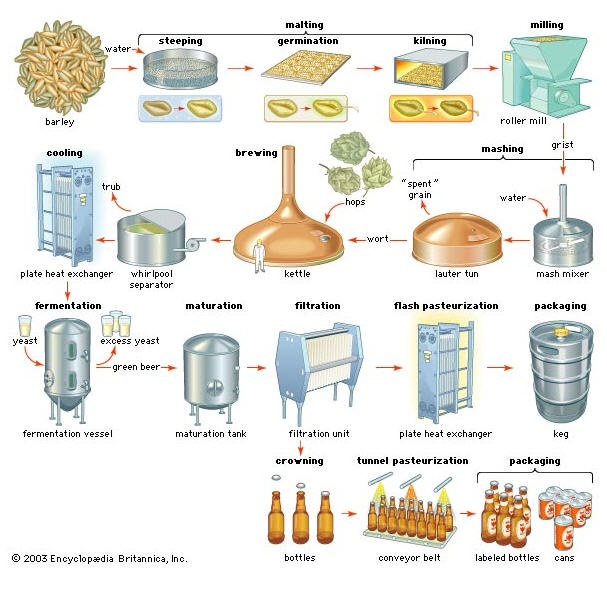