The corn wet milling industry has grown in its 150 years of existence into the most diversified and integrated of the grain processing industries. The corn refining industry produces hundreds of products and byproducts, such as high fructose corn syrup (HFCS), corn syrup, starches, animal feed, oil, and alcohol.

In the corn wet milling process, the corn kernel is separated into 3 principal parts: (1) the outer skin, called the bran or hull; (2) the germ, containing most of the oil; and (3) the endosperm (gluten and starch). From an average bushel of corn weighing 25 kilograms (kg) (56 pounds [lb]), approximately 14 kg (32 lb) of starch is produced, about 6.6 kg (14.5 lb) of feed and feed products, about 0.9 kg (2 lb) of oil, and the remainder is water. The overall corn wet milling process consists of numerous steps or stages, as shown schematically in Figure 9.9.7-2. 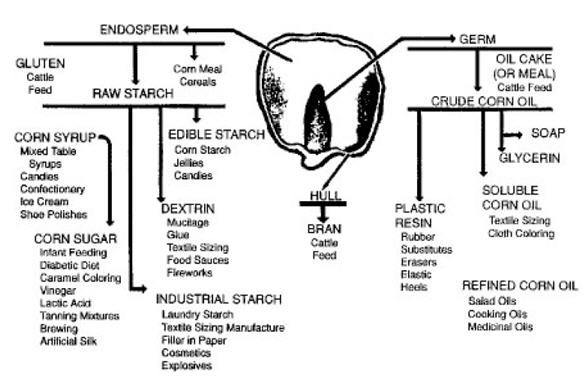 Shelled corn is delivered to the wet milling plant primarily by rail and truck and is unloaded into a receiving pit. The corn is then elevated to temporary storage bins and scale hoppers for weighing and sampling. The corn then passes through mechanical cleaners designed to remove unwanted material, such as pieces of cobs, sticks, and husks, as well as meal and stones. The cleaners agitate the kernels over a series of perforated metal sheets through which the smaller foreign materials drop. A blast of air blows away chaff and dust, and electromagnets remove bits of metal. Coming out of storage bins, the corn is given a second cleaning before going into “steep” tanks.

Steeping, the first step in the process, conditions the grain for subsequent milling and recovery of corn constituents. Steeping softens the kernel for milling, helps break down the protein holding the starch particles, and removes certain soluble constituents. Steeping takes place in a series of tanks, usually referred to as steeps, which are operated in continuous-batch process. Steep tanks may hold from 70.5 to 458 cubic meters (m3) (2,000 to 13,000 bushels [bu]) of corn, which is then submerged in a current of dilute sulfurous acid solution at a temperature of about 52°C (125°F). Total steeping time ranges from 28 to 48 hours. Each tank in the series holds corn that has been steeping for a different length of time.

Corn that has steeped for the desired length of time is discharged from its tank for further processing, and the tank is filled with fresh corn. New steeping liquid is added, along with recycled water from other mill operations, to the tank with the “oldest” corn (in steep time). The liquid is then passed through a series of tanks, moving each time to the tank holding the next “oldest” batch of corn until the liquid reaches the newest batch of corn.

Water drained from the newest corn steep is discharged to evaporators as so-called “light steepwater” containing about 6 percent of the original dry weight of grain. By dry-weight, the solids in the steepwater contain 35 to 45 percent protein and are worth recovering as feed supplements. The steepwater is concentrated to 30 to 55 percent solids in multiple-effect evaporators. The resulting steeping liquor, or heavy steepwater, is usually added to the fibrous milling residue, which is sold as animal feed. Some steepwater may also be sold for use as a nutrient in fermentation processes. The steeped corn passes through degerminating mills, which tear the kernel apart to free both the germ and about half of the starch and gluten. The resultant pulpy material is pumped through liquid cyclones to extract the germ from the mixture of fiber, starch, and gluten. The germ is subsequently washed, dewatered, and dried; the oil extracted; and the spent germ sold as corn oil meal or as part of corn gluten feed.

The product slurry passes through a series of washing, grinding, and screening operations to separate the starch and gluten from the fibrous material. The hulls are discharged to the feed house, where they are dried for use in animal feeds.

At this point, the main product stream contains starch, gluten, and soluble organic materials. The lower density gluten is separated from the starch by centrifugation, generally in 2 stages. A high-quality gluten, of 60 to 70 percent protein and 1.0 to 1.5 percent solids, is then centrifuged, dewatered, and dried for adding to animal feed. The centrifuge underflow containing the starch is passed to starch washing filters to remove any residual gluten and solubles.

The pure starch slurry is now directed into 1 of 3 basic finishing operations, namely, ordinary dry starch, modified starches, and corn syrup and sugar. In the production of ordinary dry starch, the starch slurry is dewatered with vacuum filters or basket centrifuges. The discharged starch cake has a moisture content of 35 to 42 percent and is further dewatered thermally in 1 of several types of dryers. The dry starch is then packaged or shipped in bulk, or a portion may be kept for use in making dextrin.

Across the corn wet milling industry, about 80 percent of starch slurry goes to corn syrup, sugar, and alcohol production. The relative amounts of starch slurry used for corn syrup, sugar, and alcohol production vary widely among plants. Syrups and sugars are formed by hydrolyzing the starch partial hydrolysis resulting in corn syrup, and complete hydrolysis producing corn sugar. The hydrolysis step can be accomplished using mineral acids, enzymes, or a combination of both. The hydrolyzed product is then refined, which is the decolorization with activated carbon and the removal of inorganic salt impurities with ion exchange resins. The refined syrup is concentrated to the desired level in evaporators and is cooled for storage and shipping.

Dextrose production is quite similar to corn syrup production, the major difference being that the hydrolysis process is allowed to go to completion. The hydrolyzed liquor is refined with activated carbon and ion exchange resins, to remove color and inorganic salts, and the product stream is concentrated by evaporation to the 70 to 75 percent solids range. After cooling, the liquor is transferred to crystallizing vessels, where it is seeded with sugar crystals from previous batches. The solution is held for several days while the contents are further cooled and the dextrose crystallizes. After about 60 percent of the dextrose solids crystallize, they are removed from the liquid by centrifuges, are dried, and are packed for shipment.

A smaller portion of the syrup refinery is devoted to the production of corn syrup solids. In this operation, refined corn syrup is further concentrated by evaporation to a high dry substance level. The syrup is then solidified by rapid cooling and subsequently milled to form an amorphous crystalline product.

Ethanol is produced by the addition of enzymes to the pure starch slurry to hydrolyze the starch to fermentable sugars. Following hydrolysis, yeast is added to initiate the fermentation process. After about 2 days, approximately 90 percent of the starch is converted to ethanol. The fermentation broth is transferred to a still where the ethanol (about 50 vol%) is distilled. Subsequent distillation and treatment steps produce 95 percent, absolute, or denatured ethanol.