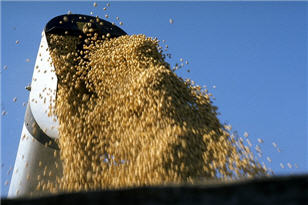 Soybeans received at the facility by truck or rail are sampled and analyzed for moisture content, foreign matter, and damaged seeds. Then the beans are weighed and conveyed to large concrete silos or metal tanks for storage prior to processing. When the facility is ready to process the soybeans, the beans are removed from the silo or tank and cleaned of foreign materials and loose hulls. Screens typically are used to remove foreign materials such as sticks, stems, pods, tramp metal, sand, and dirt. An aspiration system is used to remove loose hulls from the soybeans; these hulls may be combined

later with hulls from the dehulling aspiration step. The beans are passed through dryers to reduce their moisture content to approximately 10 to 11 percent by weight and then are conveyed to process bins for temporary storage and tempering for 1 to 5 days in order to facilitate dehulling.

Soybeans are conveyed from the process bins to the mill by means of belts or mass flow conveyors and bucket elevators. In the mill, the beans may be aspirated again, weighed, cleaned of tramp metal by magnets, and fed into corrugated cracking rolls. The cracking rolls “crack” each bean into four to six particles, which are passed through aspirators to remove the hulls (processed separately after the removal of residual bean chips). These hulls may be combined with the hulls from the grain cleaning step.

Next, the cracked beans and bean chips are conveyed to the conditioning area, where they are put either into a rotary steam tubed device or into a stacked cooker and are heated to “condition” them (i. e., make them pliable and keep them hydrated). Conditioning is necessary to permit the flaking of the chips and to prevent their being broken into smaller particles. Finally, the heated, cracked beans are conveyed and fed to smooth, cylindrical rolls that press the particles into smooth “flakes”, which vary in thickness from approximately 0.25 to 0.51 millimeters (0.010 to 0.020 inches). Flaking allows the soybean oil cells to be exposed and the oil to be more easily extracted.

Conventional desolventizing takes place in a desolventizer-toaster (DT), where both contact and noncontact steam are used to evaporate the hexane. In addition, the contact steam “toasts” the flakes, making them more usable for animal feeds. The desolventized and toasted flakes then pass to a dryer, where excess moisture is removed by heat, and then to a cooler, where ambient air is used to reduce the temperature of the dried flakes. The desolventized, defatted flakes are then ground for use as soybean meal.

Flash desolventizing is a special process that accounts for less than 5 percent by volume of the annual nationwide soybean crush. The production of flakes for human consumption generally follows the flow diagram in Figure 9.11.1-3 for the “conventional” process, except for the desolventizing step. In this step, the flakes from the oil extraction step are “flash” desolventized in a vacuum with noncontact steam or superheated hexane. This step is followed by a final solvent stripping step using steam. Both the hexane vapor from the flash/vacuum desolventizer and the hexane and steam vapors from the stripper are directed to a condenser. From the condenser, hexane vapors pass to the mineral oil scrubber and the hexane-water condensate goes to the separator. The flakes produced by the flash process are termed “white flakes”. From the stripper, the white flakes pass through a cooker (an optional step) and a cooler prior to further processing steps similar to

Crude oil is typically shipped for refining to establishments engaged in the production of edible vegetable oils, shortening, and margarine. Crude vegetable oils contain small amounts of naturally occurring materials such as proteinaceous material, free fatty acids, and phosphatides. Phosphatides are removed for lecithin recovery or to prepare the crude oil for export. The most common method of refining oil is by reacting it with an alkali solution which neutralizes the free fatty acids and reacts with the phosphatides. These reacted products and the proteinaceous materials are then removed by centrifuge. Following alkali refining, the oil is washed with water to remove residual soap, caused by saponification of small amounts of the triglycerides (oil). Color-producing substances within an oil (i. e., carotenoids, chlorophyll) are removed by a bleaching process, which employs the use of adsorbents such as acid-activated clays. Volatile components are removed by deodorization, which uses steam injection under a high vacuum and temperature. The refined oil is then filtered and stored until used or transported.