The Process of Manufacturing Chocolate

Converting cacao seeds into chocolate is a complex and time-consuming process. An individual chocolate bar can take anywhere from two to four days, or more, to make. Manufacturing processes differ slightly from plant to plant, but most factories use similar machines to break down the cacao seeds into cocoa powder, cocoa butter, and chocolate:

Sorting and Cleaning the Cacao

Chocolate manufacturers keep careful track of each cacao shipment they receive. They sort the seeds according to type and country of origin. Next, the seeds pass through a cleaning machine that removes bits of remaining pulp and debris. Then the seeds are carefully weighed so they can eventually be blended according to special formulas created by each manufacturer. Some candy bars contain up to 12 different types of seeds!

The key to excellent chocolate flavor is roasting. Large, rotating ovens roast the seeds at temperatures of 250°F or more to release the rich aromas and delicious taste. Roasting can last anywhere from 30 minutes to two hours, depending upon the variety of seed. As the seeds toss about in the oven, they lose much of their moisture. Eventually, they turn a deep brown color, similar to coffee beans.

Cracking, Fanning, and Winnowing the Cacao

The roasting process makes the shells of the cacao rather brittle. Once the seeds have cooled, the giant winnowing machine can begin its job. Inside this machine, cones that are serrated like the edges of a knife crack open (rather than crush) the thin shells to get at the seeds. Giant fans then blow away these empty husks. Next, the remaining broken seed bits, called nibs, pass through a series of sieves, which strain and sort the nibs according to size in a process called “winnowing.”

The nibs themselves are made up of 53% cocoa butter and 47% pure cocoa solids. Separating these two substances takes work. In this step, the nibs are milled/ crushed by heavy steel discs. This process generates enough friction and heat to liquefy the nibs into a thick paste, called chocolate liquor.

Some of the chocolate liquor is placed in a huge, 25-ton hydraulic press, which squeezes out the cocoa butter. This fatty, yellow substance drains away through metallic screens. Then, it can be added to dark or milk chocolates, used as the basis for white chocolate, or used in cosmetics and medicine. Once cocoa butter is extracted, the remaining solid cocoa is pulverized into cocoa powder—the product used in beverages, cooking, and baking.

Next, the chocolate crumb mixture goes through a series of steel rollers stacked on top of one another. These break down the tiny particles of milk, cocoa, and sugar within the crumb. Manufacturers must be careful—if they don’t crush this mixture enough, the chocolate will be coarse and grainy. But if they blend it too much, the chocolate will be pasty and gummy. In general, Swiss and German chocolates are refined for a longer period. This makes them smoother and finer than American or English candy, which is a matter of national taste preferences.

Next, the refined chocolate paste is poured into a vat in which a large heavy roller kneads, blends, and grinds the mixture. Agitating this paste smoothes out the sugar grains to give the chocolate a silky texture. Aerating the paste allows acids and moisture to evaporate, which creates a mellower, more well-rounded flavor. This process, called “conching,” can take up to six days to complete!

Finally, the refined chocolate is cooled and warmed repeatedly in a process called “tempering.” This gives chocolate its glossy sheen, and ensures that it will melt properly. For convenience, tempered chocolate is shipped in a liquid state to other food manufacturers that use the flavoring in candy, cookies, and ice cream. 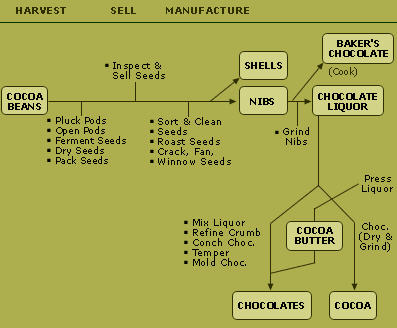 More information about growing and processing cacao beans at www.cacaoweb.net/cocoa_and_chocolate.html