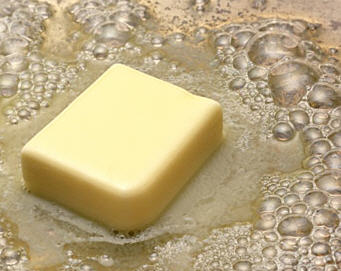 Commercial production of butter is a relatively recent development. In 1870 nearly all of the 514 million pounds of U.S. butter was produced on farms. The spreading effects of the Industrial Era and the invention of machinery changed all that. In 1864, a Bavarian brew-master applied the process of centrifugation to butter making. A cream batching machine was introduced in 1877, followed two years later by the continuous cream separator.

Other innovations helped to advance the industry. The Babcock test, perfected in 1890, accurately measured the percentage of fat in milk and cream. Pasteurization insured a high quality of both milk and cream. Additionally, the use of pure cultures of lactic acid bacteria and the invention of refrigeration aided the preservation of quality.

The first U.S. butter manufacturing creamery was built in Manchester, Iowa, in 1871. By 1991, commercial production exceeded 1.3 billion pounds, and Wisconsin and California were the leading butter producers, accounting for 654 million pounds. According to the U.S. Census Bureau, in 1997 there were 34 establishments whose primary purpose was the manufacture of creamery butter. Wisconsin and California were still primary butter-producing states. Also, the largest U.S. single-site dairy complex was the Land O’Lakes plant in Tulare, California.

Under federal regulations, butter sold in the United States is made exclusively from milk or cream, or both, and must contain at least 80 percent milkfat by weight. Coloring or salt may be added. Butter is labeled by the U.S. Department of Agriculture (USDA) as Grade AA, A, or B, according to flavor intensity, texture, color, and salt taste.