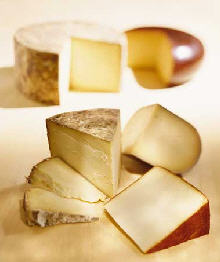 The modern manufacture of natural cheese consists of four basic steps: coagulating, draining, salting, and ripening. Processed cheese manufacture incorporates extra steps, including cleaning, blending, and melting. No two cheese varieties are produced by the same method. However, manufacturing different cheeses does not require widely different procedures but rather the same steps with variations during each step, the same steps with a variation in their order, special applications, or different ripening practices.

Cow’s milk is the most widely used milk in cheese processing. First, the milk is homogenized to ensure a constant fat level. A standardizing centrifuge, which skims off the surplus fat as cream, is often used to obtain the fat levels appropriate for different varieties of cheese. Following homogenization, the milk is ready for pasteurization, which is necessary to destroy harmful micro-organisms and bacteria.

Coagulation, or clotting of the milk, is the basis of cheese production. Coagulation is brought about by physical and chemical modifications to the constituents of milk and leads to the separation of the solid part of milk (the curd) from the liquid part (the whey). To initiate coagulation, milk is mixed with a starter, which is a culture of harmless, active bacteria. The enzyme rennin is also used in coagulation. Most of the fat and protein from the milk are retained in the curd, but nearly all of the lactose and some of the minerals, protein, and vitamins escape into the whey.

After the curd is formed, it is cut into small pieces to speed whey expulsion and increase the surface area. The curd particles are cut into various sizes, depending on the variety of cheese being made. Cutting the curd into small cubes reduces the moisture content of the curd, whereas creating larger cubes increases the moisture content. Following the cutting step, the curd is cooked, which contracts the curd particles and acts to remove whey, develop texture, and establish moisture control. The cut curds and whey are heated and agitated.

The next step in cheese manufacture, drainage, involves separating the whey from the curd. Drainage can be accelerated by either heat treatment or mechanical treatment, such as cutting, stirring, oscillating, or pressing. After the curd is dry, it is cut into blocks which can then be filled into cheese hoops for further draining and pressing. For some cheeses, special applications and procedures occur immediately before, during, or after the draining stage. For example, internally ripened, or blue veined, cheeses (e. g., Blue, Roquefort) are usually seeded with penicillium powder prior to drainage. Cooked hard cheeses (e. g., Parmesan) are stirred and warmed to accelerate and complete the separation of the whey. The separated whey may be treated and disposed of; shipped offsite in liquid or concentrated form for use as animal feed; used to make whey cheese; dried for lactose, mineral, or protein recovery; or dried for use as a food additive or use in the manufacture of

Knitting, or transforming, the curd allows the accumulating lactic acid to chemically change the curd; knitting also includes salting and pressing. This step leads to the characteristic texture of different cheeses. During the curd knitting stage, Provolone and Mozzarella cheeses are pulled and processed (these cheeses are then kneaded, drawn, shaped, and smoothed); a bean gum or some other type of gum is added to cream cheese to stabilize and stiffen it; and a creaming agent (cream and/or milk) is added to cottage cheese. During this period, specific pH levels are controlled to produce different varieties of cheese.

To salt the cheese, coarse salt is spread over the surface of the cheese or the pressed cheese is immersed in a salt solution. Salting further completes the drainage of the cheese and also affects rind formation, growth of microorganisms, and enzyme activity. Table 9.6.1-1 provides the salting method and salt percentage necessary to produce a particular variety of cheese.

Pressing determines the characteristic shape of the cheese by compacting the texture, extruding free whey from the curds, and completing the curd knitting. Pressing involves confining the wet, warm curds in a form or cloth bag. With some cheeses, vertical pressing is used; others require vacuum pressing to remove occluded air and give a close-knit body.

During the ripening or curing stage, varieties of cheeses acquire their own unique textures, aromas, appearances, and tastes through complex physical and chemical changes that are controlled as much as possible by adjusting temperature, humidity, and duration of ripening. For all cheeses, the purpose of ripening is to allow beneficial bacteria and enzymes to transform the fresh curd into a cheese of a specific flavor, texture, and appearance. Cottage and cream cheeses are not ripened, and usually have a bland flavor and soft body.

Some cheeses require the application of a special ripening agent to create a particular taste or texture. For example, some cheeses rely wholly on surface bacteria and yeast applied to their exteriors for curing and ripening (e. g., Brick, Brie, Camembert); others require injection of particular bacteria and molds (e. g., Blue) or gas-forming microorganisms (e. g., Swiss). It is during the ripening stage that the rind or crust forms on the cheese’s surface. The rind controls the loss of moisture from the internal part of the cheese and regulates the escape of gases released during ripening.

Modern cheese packaging protects the food from microorganisms and prevents moisture loss. Ripened cheeses must undergo special procedures during packaging for preservative reasons. Unripened cheeses are packaged immediately after the curd is collected and must be immediately refrigerated. Many ripened cheeses are coated in wax to protect them from mold contamination and to reduce the rate of moisture loss. Cheeses that naturally develop a thick, tightly woven rind, such as Swiss, do not require waxing. A second method of ripened cheese packaging involves applying laminated cellophane films to

Processed cheese is made by pasteurizing, emulsifying, and blending natural cheese. Processed cheese foods, spreads, and cold pack cheeses contain additional ingredients, such as nonfat milk solids and condiments. Several varieties of natural cheeses may be mixed, and powdered milk, whey, cream or butter, and water may be added. The following section describes the basic steps necessary for producing pasteurized process cheese, the most common processed cheese.

Cheeses are selected to be processed from both mild and sharp cheeses. For example, American cheese is made from Cheddar and Colby cheeses. Once selected, the cheeses must be analyzed for their fat and moisture contents to determine the proper amount of emulsifiers and salts to be added. Cheese surfaces are cleaned by scraping and trimming, and the rinds are removed. After cleaning, the cheese blocks are ground in massive grinders, combined, and the cheese mixture is heated. At this point, the melted cheese separates into a fat and serum. Emulsifiers are added to disperse the fat, and create a uniform, homogenous mass.

Other processed cheeses that are similar to the above in manufacturing are also commonly produced. For example, to produce pasteurized process cheese food, one or more of the following optional dairy ingredients are added: cream, milk, skim milk, buttermilk, and/or cheese whey. The result is a processed cheese food that is higher in moisture and lower in fat than pasteurized process cheese. After heating, processed cheese intended for spreading undergoes a creaming step, which includes mechanical kneading of the hot cheese and addition of various dairy products and other additives. Other processed cheese products include cold-packed cheese, cold-packed cheese food, and reduced fat cheeses. All processed cheeses may be enhanced with salt, artificial colorings, spices or flavorings, fruits, vegetables, and meats. Grated and powdered cheeses are produced by removing the moisture from one or more varieties of cheeses and grinding, grating, or shredding the cheese(s). Mold-inhibiting ingredients and anti-caking agents may be added as well. Dehydration takes such forms as tray drying, spray or atomized drying, and freeze drying. Popular types of grated cheese include Parmesan, Romano, Mozzarella, and Cheddar. Cheese powders, such as those made from Cheddar cheese, may be used to flavor pasta, or added to bread dough, potato chips, or dips.