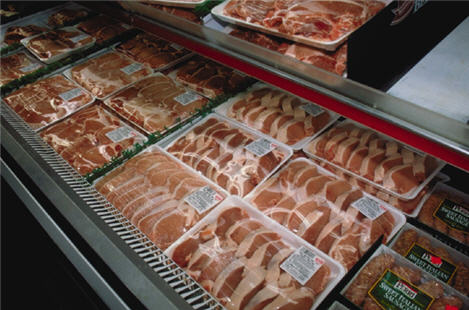 This industry includes establishments primarily engaged in the slaughtering (for their own account or on a contract basis for the trade) of cattle, hogs, sheep, lambs, and calves for meat to be sold or to be used on the same premises in canning, cooking, curing, freezing, and in making sausage, lard, and other products.

Meat packing is one of the largest agriculture-based industries in the United States. However, in recent years changing consumer eating habits have impacted the beef and pork industries, which are by far the largest sectors in this industry category. As Americans ate less beef, the beef industry retrenched, eliminating smaller and inefficient plants, and expanding their operations to incorporate poultry products. At the same time, the pork industry was striving to reposition pork as “the meat of choice.” Although technically a “red” meat, it was gaining acceptance as an alternative to the other white meat, chicken.

The desirability of stunning animals prior to slaughter was recognized in both Europe and the United States before the end of the nineteenth century. The practice became mandatory in the United States in 1960 with the passage of the Humane Slaughter Act. The Act requires that before being slaughtered, animals must be rendered unconscious by mechanical, electrical, or chemical means in order to cause the animal a minimum of excitement or discomfort. Captive-bolt pistols or pneumatic guns may be used on cattle. Pistols, electric shock, or anesthetization in a carbon dioxide chamber is allowed for sheep and pigs. Compressed-air stunners and gas chambers for smaller animals came into use after World War II. Exceptions to federal requirements are made for ritual slaughters that satisfy the requirements of a particular faith. In kosher inspection, for example, a member of the Jewish faith cuts the throat and bleeds the animal without first stunning it and then examines it for abnormalities before approving it for food use.

After stunning, cattle are suspended by one or both hind legs, while the carotid arteries and jugular veins are cut. Hides are then removed by an automated process. A straight cut opens the center of the belly to remove the viscera. Next, the carcasses are split down the center of the backbone. Beef carcasses might then be shrouded, a procedure in which the carcasses are cooled for 24 hours after being tightly wrapped in muslin that has been soaked in warm water. The carcass fat is smooth and trim when the shroud is removed. Specialty meat items like the brains, kidneys, tail, tongue, and sweetbreads do not accompany the carcass but are an important income source for packers. The procedures for veal carcasses are similar, except that the hides are left on during chilling. Veal carcasses have very little fat and would shrink during chilling if the hides were removed.

In hog slaughter, the animals are bled after stunning by severing a large vein. The carcasses are then submerged in hot water to loosen the hair. After the removal of the hair, the carcass is eviscerated, split, and chilled. 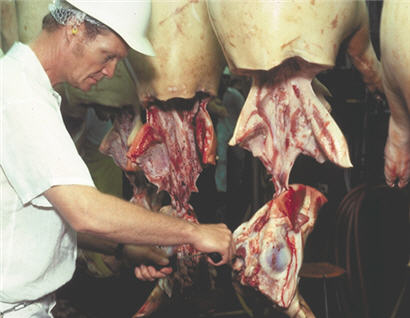