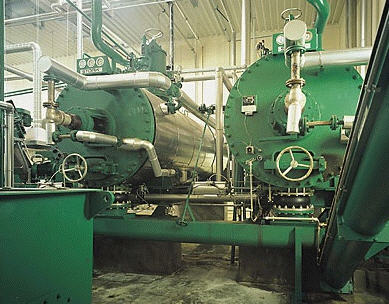 The two types of animal rendering processes are edible and inedible rendering. Edible rendering plants process fatty animal tissue into edible fats and proteins. The plants are normally operated in conjunction with meat packing plants under U. S. Department of Agriculture, Food Safety and Inspection Services (USDA/FSIS) inspection and processing standards. Inedible rendering plants are operated by independent renderers or are part of integrated rendering operations. These plants produce inedible tallow and grease, which are used in livestock and poultry feed, soap, and production of fatty-acids.

Fat trimmings, usually consisting of 14 to 16 percent fat, 60 to 64 percent moisture, and 22 to 24 percent protein, are ground and then belt conveyed to a melt tank. The melt tank heats the materials to about 43°C (110°F), and the melted fatty tissue is pumped to a disintegrator, which ruptures the fat cells. The proteinaceous solids are separated from the melted fat and water by a centrifuge. The melted fat and water are then heated with steam to about 93°C (200°F) by a shell and tube heat exchanger. A second-stage centrifuge then separates the edible fat from the water, which also contains any remaining protein

fines. The water is discharged as sludge, and the “polished” fat is pumped to storage. Throughout the process, direct heat contact with the edible fat is minimal and no cooking vapors are emitted.

There are two processes for inedible rendering: the wet process and the dry process. Wet rendering is a process that separates fat from raw material by boiling in water. The process involves addition of water to the raw material and the use of live steam to cook the raw material and accomplish separation of the fat. Dry rendering is a batch or continuous process that dehydrates raw material in order to release fat. Following dehydration in batch or continuous cookers, the melted fat and protein solids are separated. At present, only dry rendering is used in the United States. The wet rendering process is no longer used because of the high cost of energy and of an adverse effect on the fat quality.

In the batch process, the raw material from the receiving bin is screw conveyed to a crusher where it is reduced to 2.5 to 5 centimeters (cm) (1 to 2 inches [in.]) in size to improve cooking efficiency. Cooking normally requires 1.5 to 2.5 hr, but adjustments in the cooking time and temperature may be required to process the various materials. A typical batch cooker is a horizontal, cylindrical vessel equipped with a steam jacket and an agitator. To begin the cooking process the cooker is charged with raw material, and the material is heated to a final temperature ranging from 121° to 135°C (250° to 275°F). Following the cooking cycle, the contents are discharged to the percolator drain pan. Vapor emissions from the cooker pass through a condenser where the water vapor is condensed and noncondensibles are emitted as VOC emissions.

Since the 1960, continuous rendering systems have been installed to replace batch systems at some plants. Figure 9.5.3-2 shows the basic inedible rendering process using the continuous process. The system is similar to a batch system except that a single, continuous cooker is used rather than several parallel batch cookers. A typical continuous cooker is a horizontal, steam-jacketed cylindrical vessel equipped with a mechanism that continuously moves the material horizontally through the cooker. Continuous cookers cook the material faster than batch cookers, and typically produce a higher quality fat product. From the cooker, the material is discharged to the drainer, which serves the same function as the percolator drain pan in the batch process. The remaining operations are generally the same as the batch process operations.

Current continuous systems may employ evaporators operated under vacuum to remove moisture from liquid fat obtained using a preheater and a press. In this system, liquid fat is obtained by precooking and pressing raw material and then dewatered using a heated evaporator under vacuum. The heat source for the evaporator is hot vapors from the cooker/dryer. The dewatered fat is then recombined with the solids from the press prior to entry into the cooker/dryer.

Whole blood from animal slaughterhouses, containing 16 to 18 percent total protein solids, is processed and dried to recover protein as blood meal. At the present time, less than 10 percent of the independent rendering plants in the U. S. process whole animal blood. The blood meal is a valuable ingredient in animal feed because it has a high lysine content. Continuous cookers have replaced batch cookers that were originally used in the industry because of the improved energy efficiency and

product quality provided by continuous cookers. In the continuous process, whole blood is introduced into a steam-injected, inclined tubular vessel in which the blood solids coagulate. The coagulated blood solids and liquid (serum water) are then separated in a centrifuge, and the blood solids dried in either a continuous gas-fired, direct-contact ring dryer or a steam tube, rotary dryer.

The raw material is introduced into a batch cooker, and is processed for 30 to 45 minutes at temperatures ranging from 138° to 149°C (280° to 300°F) and pressures ranging from (40 to 50 psig). This process converts keratin, the principal component of feathers and hog hair, into amino acids. The moist meal product, containing the amino acids, is passed either through a hot air, ring-type dryer or over steam-heated tubes to remove the moisture from the meal. If the hot air dryer is used, the dried

product is separated from the exhaust by cyclone collectors. In the steam-heated tube system, fresh air is passed countercurrent to the flow of the meal to remove the moisture. The dried meal is transferred to storage. The exhaust gases are passed through controls prior to discharge to the atmosphere.

Grease from restaurants is recycled as another raw feed material processed by rendering plants. The grease is bulk loaded into vehicles, transported to the rendering plant, and discharged directly to the grease processing system. During processing, the melted grease is first screened to remove coarse solids, and then heated to about 93°C (200°F) in vertical processing tanks. The material is then stored in the processing tank for 36 to 48 hr to allow for gravity separation of the grease, water, and fine solids. Separation normally results in four phases: (1) solids, (2) water, (3) emulsion layer, and (4) grease product. The solids settle to the bottom and are separated from the water layer above. The emulsion is then processed through a centrifuge to remove solids and another centrifuge to remove water and any remaining fines; the grease product is skimmed off the top.