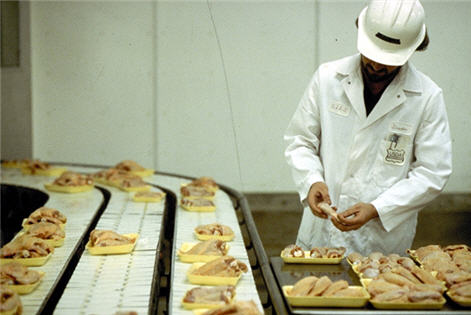 This industry includes establishments primarily engaged in slaughtering, dressing, packing, freezing, and canning poultry, rabbits, and other small game, or in manufacturing products from such meats, for their own account or on a contract basis for the trade. This industry also includes the drying, freezing, and breaking of eggs.

Beginning in the early 1930s, the poultry industry was dominated by many small growers and processors. The U.S. poultry business evolved into a vertically integrated industry in the mid-1930s, in which a few top companies accounted for most of the country’s broiler chicken) and turkey production. Vertical integration combined the previously independent and fragmented operations of feedmills, hatcheries, farms, slaughterers, and processors into giant conglomerates that managed all stages of production.

Broilers, which are chickens raised specifically for table consumption, represented by far the largest component of the industry, with the value of production exceeding $14.1 billion in the late 1990s, compared to $2.8 billion for turkey. In 2001, production increased to roughly 8.3 billion broilers with an estimated weight of nearly 42 billion pounds, compared to 7.76 billion broilers, the equivalent of 37.5 billion pounds of broiler meat, produced in 1997. It is anticipated that the amount of broilers produced per year will continue to rise. The value of egg production increased 1.5 percent in 2001; production in this segment is expected to grow as well.

New processing and packaging technologies facilitated the poultry industry’s rapid growth in the last half of the twentieth century. Over the years, numerous automated processes have taken the place of manual labor at various stages of production. For example, mechanized killing machines capable of killing five birds per second, five times more than a skilled worker could accomplish with a sharp knife, were introduced in the 1960s. Defeathering operations were also automated.

Mechanical eviscerating machines came into use in the 1970s. At about the same time, mechanized cutting of the birds into parts was increasingly performed in processing plants rather than by meatcutters in retail outlets. The late 1970s also saw the introduction of automatic deboning machines capable of processing up to 800 pieces of chicken a minute and separating edible meat from bonier parts. The machines also collected meat scraps from partially defleshed carcasses; the scraps were used in the further processing of patties, soups, luncheon meats, and other products.

By the 1990s, as consumers began to expect the ready-to-cook convenience of portioned chicken, ultra-thin, high-pressure waterjet cutting and shaping delivered it. Video cameras sensed the changing pattern from a light projected on a partially prepared carcass. A computer received the information, calculated the best cutting patterns, and sent directions to waterjet nozzles, which then made precise cuts, trimming and portioning the chicken at the same time. Another machine used pistons to force chopped chicken through molds that created three-dimensional formed products. The possibilities included geometric shapes, concave patties, and pieces that looked like boneless breasts.

Since sanitation has always been a concern, the poultry processing industry continued research into chemical cleansers and new dispensing techniques in the 1990s. For example, some firms experimented with low-cost robots that could transfer a variety of poultry products from conveyer belts to other processing areas. Also, improved inspection methods instated in 1996 and the use of irradiation have increased poultry safety. 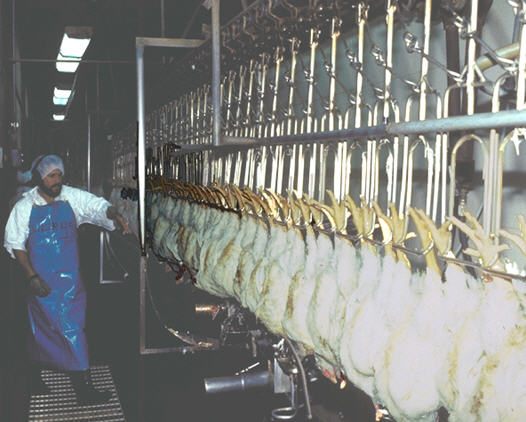