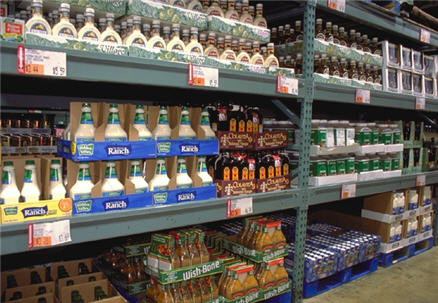 In the United States, the term “pickles” generally refers to pickled cucumbers. Three methods currently are used to produce pickles from cucumbers: brine stock, fresh pack, and refrigerated. Smaller quantities are preserved by specialized brining methods to produce pickles for delicatessens and other special grades of pickles. Pickling cucumbers are harvested and transported to the processing plants. The cucumbers may be field graded and cooled, if necessitated by the temperature,

prior to transport to the plants. The brine stock process begins with brining the cucumbers through the addition of salt or a

sodium chloride brining solution. The cucumbers undergo a fermentation process in which lactic acid is formed. During fermentation, the cucumbers are held in 5 to 8 percent salt; after fermentation, the salt content is increased weekly in 0.25 to 0.5 percent increments until the final holding strength is 8 to 16 percent salt. The cucumbers, called brine stock, are then graded and cut (optional), before being desalted by washing in an open tank with water at ambient temperature to obtain the desired salt level and processed into dill, sour, sweet, or other pickle products. Containers are filled with the cut or whole pickles, and sugar and vinegars are added. Preservatives are also added if the product is not pasteurized. The containers are then vacuum sealed and pasteurized (optional) until the temperature at the center of the cucumbers reaches about 74°C (165°F) for about 15 minutes. The product is then cooled, and the containers are labeled, packaged, and stored.

The fresh pack process begins with grading of the pickling cucumbers, followed by washing with water. The cucumbers are then either cut and inspected before packaging, or are sometimes “blanched” if they are to be packaged whole. The “blanching” consists of rinsing the cucumber with warm water to make it more pliable and easier to pack in the container. It is not a true blanching process. Containers are filled with the cut or whole cucumbers, and then salt, spices, and vinegars are

added. The containers are then vacuum sealed and heated (pasteurized) until the temperature at the center of the cucumbers reaches about 74°C (165°F) for about 15 minutes. The product is then cooled, and the containers are labeled, packaged, and stored.

The refrigerated process begins with grading of the pickling cucumbers, followed by washing with water. The washed cucumbers are packed into containers, and then salt, spices, vinegars, and preservatives (primarily sodium benzoate) are added. The containers are then vacuum sealed, labeled, and refrigerated at 34° to 40°F. In this process, the cucumbers are not heat-processed before or after packing.

In the sauerkraut process the cabbage is harvested, transported to the processing plant, washed, and prepared for the fermentation by coring, trimming, and shredding. The shredded cabbage is conveyed to a fermentation tank where salt is added up to a final concentration of 2 to 3 percent (preferably 2.25 percent), by weight. After salt addition, the mixture is allowed to ferment at ambient temperature in a closed tank. If insufficient salt is added or air is allowed to contact the surface of the cabbage, yeast and mold will grow on the surface and result in a softening of the final sauerkraut product. When fermentation is complete, the sauerkraut contains 1.7 to 2.3 percent acid, as lactic acid. Following fermentation, the sauerkraut is packaged in cans, plastic bags, or glass containers; cans are the most prevalent method. In the canning process, the sauerkraut, containing the original or diluted fermentation liquor, is heated to 85° to 88°C (185° to 190°F) by steam injection in a thermal screw and then packed into cans. The cans are steam exhausted, sealed, and cooled. After cooling, the cans are labeled, packed, and stored for shipment. In the plastic bag process, the sauerkraut, containing the

fermentation liquor, is placed in plastic bags and chemical additives (benzoic acid, sorbic acid, and sodium bisulfite) introduced as preservatives. The bags are sealed and refrigerated. Small quantities, approximately 10 percent of the production, are packaged in glass containers, which may be preserved by heating or using chemical additives.

A typical sauce production operation involves the mixture of several ingredients, often including salts, vinegars, sugar, vegetables, and various spices. The mixture is allowed to ferment for a period of time, sealed in containers, and pasteurized to prevent further fermentation. The production processes for Worcestershire sauce and hot pepper sauces are briefly described as examples of sauce production.

The name “Worcestershire Sauce” is now a generic term for a type of food condiment that originated in India. In the preparation of the true sauce, a mixture of vinegar, molasses, sugar, soy, anchovies, tamarinds, eschalots, garlic, onions, and salt is prepared and well mixed. Spices, flavorings, and water are added and the mixture transferred to an aging tank, sealed, and allowed to mature and ferment over a period of time. The fermenting mixture is occasionally agitated to ensure proper

blending. After fermentation is complete, the mixture is processed by filtration through a mesh screen which allows the finer particles of the mixture to remain in the liquid. The product is then pasteurized prior to bottling to prevent further fermentation. Following bottling, the product is cooled, labeled, and packaged.

Hot sauce or pepper sauce is a generic name given to a large array of bottled condiments produced by several manufacturers in the U. S. The hot peppers, usually varieties of Capsicum annum and Capsicum frutescens, give the products their heat and characteristic flavor; vinegar is the usual liquid medium. Manufacturing processes vary by producer; however, in most, the harvested hot peppers are washed and either ground for immediate use or stored whole in brine for several months

until processed. In processing, the whole peppers are ground, salt and vinegar added, and the mixture passed through a filter to remove seeds and skin. The end-product, a stable suspension of the pulp from the pepper, vinegar, and salt, is then bottled, labeled, and stored for shipment.

Salad dressings (except products modified in calories, fat, or cholesterol) are typically made up of oil, vinegar, spices, and other food ingredients to develop the desired taste. These dressings are added to many types of foods to enhance flavor. There are U. S. FDA Standards of Identity for three general classifications of salad dressings: mayonnaise, spoonable (semisolid) salad dressing, and French dressing. All other dressings are nonstandardized and are typically referred to as “pourable”.

ingredients and slowly adding oil while agitating the mixture. Vinegar is then added to the mixture and, after mixing is complete, containers are filled, capped, labeled, and stored or shipped. Improved texture and uniformity of the final product is achieved through the use of colloidalizing or homogenizing machines.

and/or malic acid, sequestrants, and crystallization inhibitors. To prepare the salad dressing, a portion of the starch paste and other optional ingredients, except the oil, are blended and then the oil is slowly added to form a “preemulsion”. When one-half of the oil is incorporated, the remainder of the starch paste is added at the same rate as the oil. After all of the starch paste and oil have been added, the mixture continues to blend until the ingredients are thoroughly mixed and then the mixture is milled to a uniform consistency. The salad dressing is placed into containers that are subsequently capped, labeled, and stored or shipped.

Liquid dressings, except French dressing, do not have a FDA Standard of Identity. They are pourable products that contain vegetable oil as a basic ingredient. Dressings may also contain catsup, tomato paste, vinegars, cheese, sherry, spices, and other natural ingredients. Liquid dressings are packaged either as separable products with distinct proportions of oil and aqueous phases or as homogenized dressings that are produced by the addition of stabilizers and emulsifiers. The homogenized dressings are then passed through a homogenizer or colloidalizing machine prior to bottling.