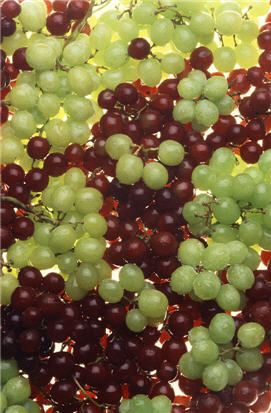 Wine is an alcoholic beverage produced by the fermentation of sugars in fruit juices, primarily grape juice. In general, wines are classified into two types based on alcohol content: table wines (7 percent to 14 percent, by volume) and dessert wines (14 percent to 24 percent, by volume). Table wines are further subdivided into still and sparkling categories, depending upon the carbon dioxide (CO2) content retained in the bottled wine. Still table wines are divided into three groups: red, rosé

(blush), and white, based on the color of the wine.

The basic steps in vinification (wine production) include harvesting, crushing, pressing, fermentation, clarification, aging, finishing, and bottling. A simplified process diagram outlining the basic steps in the production of still table wines is shown in Figure 9.12.2-1. Harvesting of grapes is usually conducted during the cooler periods of the day to prevent or retard heat buildup and flavor deterioration in the grape. Most wineries transport the whole grapes but some crush the grapes in the vineyard and transport the crushed fruit to the winery. Stemming and crushing are commonly conducted as soon as possible after harvest. These two steps are currently done separately using a crusher-stemmer, which contains an outer perforated cylinder to allow the grapes to pass through but prevents the passage of stems, leaves, and stalks.

Crushing the grapes after stemming is accomplished by any one of many procedures. The three processes generally favored are: (1) pressing grapes against a perforated wall; (2) passing grapes through a set of rollers; or (3) using centrifugal force. Generally, 25 to 100 milligrams (mg) of liquified sulfur dioxide (SO2) are added per liter of the crushed grape mass to control oxidation, wild yeast contamination, and spoilage bacteria. Maceration is the breakdown of grape solids following crushing of the grapes. The major share of the breakdown results from the mechanical crushing but a small share results from enzymatic breakdown. In red and rosé wine production, the slurry of juice, skins, seeds, and pulp is termed the “must”. In white wine production, the skins, seeds, and pulp are separated from the juice before inoculation with yeast and only the juice is fermented. A fermenting batch of juice is also called “must”. Thus, the term “must” can refer to either the mixture of juice, seeds, skins, and pulp for red or rosé wines or only the juice for white wines. Maceration is always involved in the initial phase of red wine fermentation.

The juice from the grapes may be extracted from the “must” in a press. Additionally, gravity flow juicers may be used initially to separate the majority of the juice from the crushed grapes and the press used to extract the juice remaining in the mass of pulp, skins, and seeds (pomace). There are many designs of dejuicers but, generally, they consist of a tank fitted with a perforated basket at the exit end. After gravity dejuicing has occurred, the pomace is placed in a press and the remaining juice extracted. There are three major types of presses. The horizontal press is used for either crushed or uncrushed grapes. A pneumatic press can be used for either crushed or uncrushed grapes as well as for fermented “must”. In the continuous screw press, the “must” is pumped into the press and forced in the pressing chamber where perforated walls allow the juice to escape.

After pressing, white “must” is typically clarified and/or filtered prior to fermentation to retain the fruity character. The white juice is commonly allowed to settle for up to 12 hours but may be centrifuged to speed the clarification.

Fermentation is the process whereby the sugars (glucose and fructose) present in the “must” undergo reaction by yeast activity to form ethyl alcohol (ethanol) and CO2.

In the U. S., the sugar content of the juice is commonly measured with a hydrometer in units of degree Brix (°B), which is grams (g) of sugar per 100 grams of liquid. Fermentation may be initiated by the addition of yeast inoculation to the “must”.

The fermentation process takes place in tanks, barrels, and vats of a wide variety of shapes, sizes, and technical designs. Tanks are different from vats in that tanks are enclosed, whereas vats have open tops. In most of the larger wineries, tanks have almost completely replaced vats. Since the 1950s, the move has been away from the use of wooden tanks, primarily to stainless steel tanks. Lined concrete tanks are also used, and fiberglass tanks are becoming more popular because of their light weight and lower cost.

The fermentation process is an exothermic reaction and requires temperature control of the fermenting “must”. Red wines are typically fermented at 25° to 28°C (70° to 82°F) and white wines at 8° to 15°C (46° to 59°F). Almost all of the fermentation is conducted by the batch process and continuous fermentors are rarely used in the U. S. Size of the fermentors is based primarily on the volume of “must” to be fermented. During fermentation of red wines, the CO2 released by the yeast metabolism becomes entrapped in the pomace (layer of skins and seeds) and causes it to rise to the top of the tank where it forms a cap. The pomace cap is periodically covered with the “must” to increase color removal, aerate the fermenting “must”, limit growth of spoilage organisms in the cap, and help equalize the temperature in the fermenting “must”.

For white wines, the main technical requirement is efficient temperature control. Temperature is one of the most influential factors affecting the fermentation process. During fermentation of both white and red “must”, the CO2, water vapor, and ethanol are released through a vent in the top of the tank. Malolactic fermentation sometimes follows the primary fermentation and results in a reduction in acidity and increased pH. There are very diverse opinions about this step because the fermentation, to varying degrees, can improve or reduce wine quality.

After fermentation, all wines undergo a period of adjustment (maturation) and clarification prior to bottling. The process of maturation involves the precipitation of particulate and colloidal material from the wine as well as a complex range of physical, chemical, and biological changes that tend to maintain and/or improve the sensory characteristics of the wine. The major adjustments are acidity modification, sweetening, dealcoholization, color adjustment, and blending.

Following the fermentation process, a preliminary clarification step is commonly accomplished by decanting the wine from one vessel to another, called racking, in order to separate the sediment (lees) from the wine. Current racking practices range from manually decanting wine from barrel to barrel to highly sophisticated, automated, tank-to-tank transfers. In all cases, separation occurs with minimal agitation to avoid resuspending the particulate matter. The residue from racking may be filtered to recover wine otherwise lost with the lees or may be used “as is” for brandy production.

Stabilization and further clarification steps follow maturation and initial clarification to produce a permanently clear wine with no flavor faults. The steps entail various stabilization procedures, additional clarification (fining), and a final filtration prior to bottling. The most common stabilization technique used for many red wines and some white wines is aging the wine for a period of months or years.

Vessels used to store and age wine, termed cooperage, are produced in a wide range of sizes, depending on their intended use. White oak has traditionally been used for the barrels to age wine, but currently its usage is reserved primarily for the production of premium white and red wines and some fortified wines. Water and ethanol are lost through the barrel surfaces and a partial vacuum develops in the space created by this loss. Each barrel is periodically opened and topped off with wine to fill the void created by the ethanol and water loss. Cooperage constructed from materials other than wood has many advantages and is less expensive to maintain. Stainless steel is often preferred, but fiberglass and concrete are also used. In addition to aging, other stabilization procedures are used to prevent formation of potassium bitartrate or calcium tartrate crystals, haziness (casse) resulting from protein coalescence, casse resulting from oxidation of tannins present in the wine, and haziness due to metal ions such as iron and copper. Enzyme mixtures are used to remove polysaccharides which can cause filtration problems and haze formation.

Most wines contain viable but dormant microorganisms. Racking is used as an initial step in microbial stabilization but longterm stability frequently requires use of sulfur dioxide as the antimicrobial agent. Other methods include pasteurization and filter sterilization. Sulfur dioxide may be added at various stages in wine production to prevent microbial growth and oxidation. Finishing (fining) agents are commonly added to accelerate the precipitation of suspended material in wine.

Prior to bottling, a final clarification step is used to remove any remaining suspended material and microbes in the wine. This step involves only physical methods of clarification, generally a filtration procedure.

Glass bottles are the container of choice for premium quality wines and for sparkling wines. Because of disadvantages such as weight and breakage, glass bottles are sometimes being replaced by new containers, such as bag-in-box, for many standard quality, high volume wines.

To protect the wine against microbial spoilage, and to limit oxidation, the SO2 content in the wine is adjusted to a final level of 50 mg/L before filling. Precaution is taken to minimize contact with air during filling and thereby to reduce oxidation. This is done by either flushing the bottle with inert gas before filling or flushing the headspace with inert gas after filling.

Brandy is an alcoholic distillate or mixture of distillates obtained from the fermented juice, mash, or wine from grapes or other fruit (e. g., apples, apricots, peaches, blackberries, or boysenberries). Brandy is produced at less than 190° proof and bottled at a minimum of 80° proof. (In the United States, “proof” denotes the ethyl alcohol content of a liquid at 15.6°C (60°F), stated as twice the percent ethyl alcohol by volume.) Two types of spirits are produced from wine or wine residue: beverage brandy and “wine spirits”.

In the United States, distillation is commenced immediately after the fermentation step, generally using continuous column distillation, usually with an aldehyde section, instead of pot stills.

After distillation, the brandy is aged in oak casks for 3 to 15 years or more. During aging, some of the ethanol and water seep through the oak and evaporate, so brandy is added periodically to compensate for this loss. Caramel coloring is added to give the brandy a characteristic dark brown color. After aging, the brandy may be blended and/or flavored, and then chilled, filtered, and bottled.