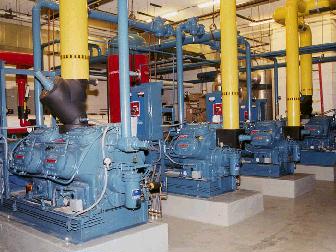 There are a few companies that will custom make engine-driven refrigeration units using any gas engine and compressor. TecoFROST is currently the only ‘off-the-shelf’ packager of standard systems. See the Case Studies below for information on installations that are using TecoFROST, Caterpillar and Cummins engines.

It is extremely important to understand the control system on the compressors before making assumptions about the savings potential with a switch to natural gas engines. Compressor systems that are lightly loaded (ie: a lot of the time cylinders and/or the motor drive is shut off) will get little or NO benefit from the variable speed aspect of an engine. The only potential advantage (savings) would be the fuel cost differences.

Further, because refrigeration systems are sized for peak-day loads but run year round, it is very important to understand the actual load profile. In the case of freezer, how product is moved in and out also dramatically affects refrigeration loads.

Because refrigeration systems usually run 24/7 all year, there are a high number of run hours. If the savings per hour is there, payback can be quite rapid. Most economic studies will show that gas units should be used in a hybrid system, with gas run only during the high cost hours, and electric base load units run the rest of the time. If there is a full time use/need for heat recovery, then it would probably make economic sense to run the gas unit to also match the thermal load.

The most difficult part of an analysis between gas and electric refrigeration systems, is determining the actual (estimating or measuring to the best of your ability) load profile of the refrigeration system. As discussed in Operations above, you need to understand the control system, the performance curves of the equipment in the given application, the daily and/or seasonal loads on the system, and the utility rate structures.

After you have a good understanding of the load profile of the refrigeration system, it becomes a matter of calculating the difference between electric drive and gas drive performance curves. For an existing installation, a good way to start is to create a spreadsheet model that estimates the electric usage and costs of the existing system, and then compare the model’s results to the actual electric bills. Once you are able to model the existing system, substitute the performance curve and operating costs of the gas unit, and compare the results.

If there is a need/value for heat recovery, calculate this additional savings potential only after you’ve determined the refrigeration savings. It will make no sense to install an engine drive system based only on the heat recovery savings. There are less expensive ways to generate heat. Generally, about 1/3 of the gas input energy can be recovered as usable waste heat, so long as it can be used as hot water. Larger engines can produce some low pressure steam, but it is a pretty small value compared to the cost to recover it.

First cost of equipment is about twice that of electric.